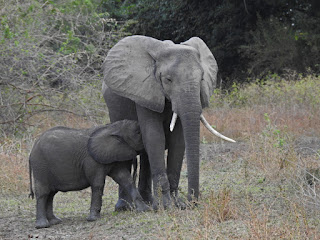 Baby elephants are one of the most endearing of all Africa's animals. The intelligence and social nature of elephants makes them animals that humans can easily relate to. On my most recent trip to Zambia’s lower Zambezi I was privileged to spend considerable time watching and photographing these incredible animals.

Early one morning we were lucky enough to see a herd of elephants crossing a small river. Two of the babies were so small that they had not yet grasped the idea of using their trunks to drink. The pair comically tried to dip their heads and mouths into the river to drink. Not really a very successful technique but fascinating to watch. Later I watched one of the more mature infants trying to show the younger animals how to drink before giving up and suckling its mother as the herd reached the bank.

The protective nature of the herd was an oft repeated feature of elephant behaviour. Mature females would quickly shepherd their young into the centre of the group at the first hint of danger. On one occasion a mature female, sporting massive tusks, stood within a couple of metres of our vehicle while the rest of the herd quickly shuffled away through the bush then quietly followed after giving us a loud trumpeting blast to voice disapproval.

We stayed at the river crossing for over an hour watching a variety of wildlife but it was the elephants that really stole the day.