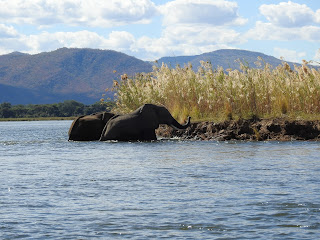 Zambezi Elephants
We were travelling down the Zambezi River by powerboat To the Chongwe River Camp. On each side of the vast expanse of water were scrub and reed beds while the middle was dotted with grass covered islands.

Hippos were the most prevalent animals and a few crocodiles ignored us as they basked along the banks; mouths agape for temperature control and teeth exposed. 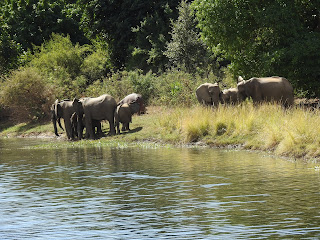 But it was the elephants that I found most intriguing. They were in small groups of five to twenty with a range of sizes from massive adults to teenagers and babies.

Every so often we wold catch a glimpse of them feeding amongst the long grass or patrolling the bank ready to cross.

On one occasion I was lucky enough to see a pair of adults emerging from the river to clamber up the bank and feed on a grass island.

Later that day I sat on my deck at camp and watched a herd crossing the smaller Chongwe river just a few hundred metres away from me. Elephants are quite common in the lower Zambezi national parks but they never fail to elicit a strong emotional response whenever I encounter them.