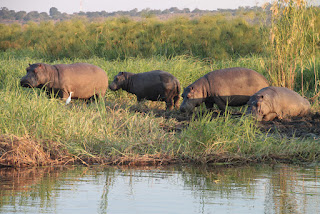 Nature is volatile and unpredictable. It never does what you need or expect. But occasionally, when the gods are in your favour and the stars positioned just so; animals do what you want.

I had been travelling along a tributary of the Zambezi watching hippos and trying to get a single shot that described their behaviour. These imposing animals are part of a complex ecosystem. They contribute tonnes of fertiliser to the river systems in the form of dung. Birds follow them as they trundle along river banks stirring up insects. 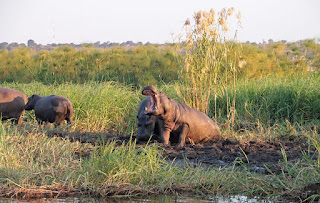 Adult Hippos in their prime have few natural predators. Young animals are sometimes prey for crocodiles while the old and weak are fodder for a myriad of hunters and their remains an appetising meal for crocodiles and a host of carrion eaters from vultures to hyenas.

Eventually I managed to make a pair of images that described aspects of their social behaviour as well as capturing their natural environment. Hopefully these aspects of hippo life are obvious from the pictures.

For more of my work please visit
https://naturallysouthaustralia.com/

Posted by naturallysouthaustralia.com at 18:22 No comments: 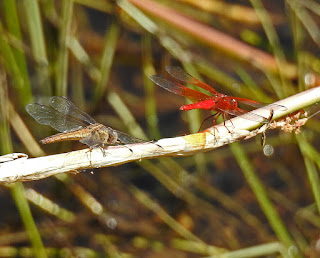 Safaris are usually about the big things; vast plains and rivers, elephants, buffalo, lions and gargantuan crocodiles. While these are spectacular animals there is a world of smaller creatures that live on the African continent, not the least of which are the insects. And, when it comes to insects the dragonflies are one of the most attractive and beautiful of creatures.

On a recent trip to the South Luanga National Park in Zambia I spent a couple of days around the camp due to an injury and roamed the area photographing both butterflies and dragonflies. This pair of male and female Orange Dropwings was hovering near the bank of a local river. I waited for a while and eventually they settled on a branch jutting out from the water and I took the shot; a great example of sexual dimorphism in the insect world.

For more of my work please visit

Posted by naturallysouthaustralia.com at 23:15 No comments: