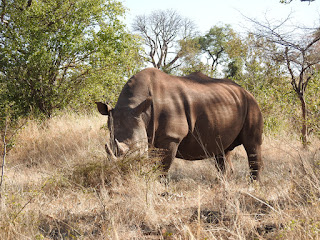 White Rhinos are an endangered species and the opportunity to see them in a wild environment is one not to be missed. The rhino reserve outside Livingstone in Zambia offered us the unique experience of trekking through a bushland habitat while our guide explained many things about the bush, its plants and animals with a special emphasis on the behaviour of the small group of white rhinos that live in this area. After a couple of hours he located a solitary male feeding in a clearing.
We were close but tactically downwind. Rhinos have a wonderful sense of smell, reasonable hearing but woefully bad eyesight. An irritated animal can be very dangerous and we approached the massive animal with great caution.

The term white in the rhino’s name is thought to be an English misunderstanding of the Africaans word ‘wyd’ which means wide and refers to the rather wide square mouth of this grazing rhino as compared to the narrow, prehensile upper lip of its browsing black rhino cousin.

This rhino sanctuary is one of several places in Africa where these magnificent  animals are protected and an armed guard accompanied on our quest; not to protect us against the rhinos but to ensure that poachers do not further deplete the already dangerously low numbers.