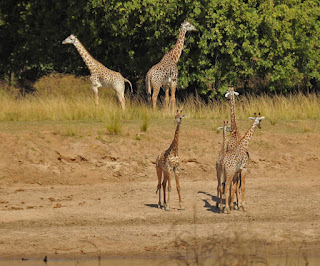 We had been following the dusty trail along the banks of the Zambezi River for the last half an hour. The usual suspects; hippos, crocodiles and a variety of water birds; were prolific along the shallow edge of the river. A few puku were drinking near one sweeping sand bar with a dominant male keeping a wary eye some large crocodiles basking nearby;  typical African afternoon on the mighty river.

We rounded another bend and came up on a raised embankment where our guide had chosen a safe place for an afternoon snack and drinks when the ‘wild-scape’ took an unusual turn. There, by the edge of the river were half a dozen giraffes; four calves and two adults close to the water with several more adults further back in the bush (a group of giraffes is called a tower).  The adults were watching the youngsters frolicking by the water in what appeared to be a kind of crèche situation. Quite a scene to enjoy while we sipped our drinks and munched on home-made cookies.

Though we encountered many more giraffes on our safari drives in the South Luangwa Natonal Park this was, without doubt, the most memorable.