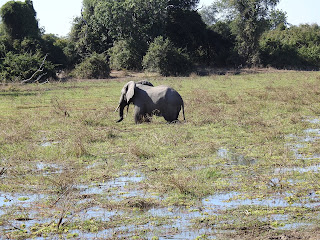 The lake is choked with Nile cabbage an invasive weed that can take over large areas creating problems for wildlife but not for the ever present crocodiles. I can see the heads and eyes of several massive specimens from the shoreline where we are having a morning break. We have been following a herd of elephants for the last half an hour and they are now gorging themselves on vegetation plants on the opposite side of the water.

The big male seems to be keeping watch while the females and their calves approach the water. They are wary as crocodiles have been known to snatch a calf and even lock on to an adult’ s trunk. Eventually the male wades into the swamp and starts to fed. However the rest of the herd is more circumspect and continue to watch him from the relative safety of the bank.

We observe the herd for the rest of our break then move on to another location where our guide thinks there is another group with several nursing females and some young bulls in the vicinity.