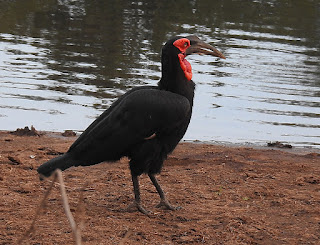 Southern Ground Hornbill
We headed out from the camp in the early evening and pushed the 4WDs along a stony creek bed occasionally venturing into the shallow water. There were both crocodiles and hippos in the deeper pools but they seemed unconcerned by the vehicles. The guides were looking for elephant tracks that lead down to the water.  Finally they found the most recent signs of pachyderm activity and shunted the powerful vehicles down a cog or two to climb the steep bank.

Just as we emerged from the scrub one of the guides stopped and listened carefully. The low grunting boom was just audible over the sound of rushing water and the idling motor.  We waited for a few moments and then several large black birds, about the size of a turkey, emerged from the bushes, turned their red billed heads to look at us before disappearing back into the undergrowth.

I had often seen the smaller yellow and red billed hornbills in both Zambia and Botswana but this was my first close sighting of the much larger southern ground hornbill. They certainly were spectacular birds with their massive bills and confident manner as the small group meandered through the scrub searching for prey which included reptiles, insects and even small mammals.