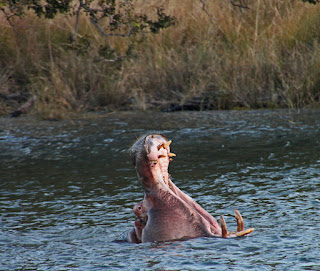 Cocktails aboard  a cruise down the Zambezi  is not to be sneezed at especially when the sunsets are glorious and there is a good chance of catching sight of some wildlife.  We had driven from Victoria Falls Hotel to a little landing not too far from the Chobe National  Park and  were not expecting to start our serious wildlife viewing until we flew into The Okavango Delta the next day. But an aggressive male hippo who took exception to our presence in his territory provided some lovely late afternoon excitement.  He followed the boat for several hundred metres displaying his disapproval with toothy yawns and several mock charges at the boat. Later in the delta we saw this behaviour on many occasions but that first encounter over a daiquiri and hors d’oeuvres was rather special.